It will remain to be seen if the short-lived government shutdown will yield any negative consequences in the future, but one thing was for sure: Zion National Park stayed open as usual. The doors remained open and the city of Springdale was alive and well. Oftentimes when national events such as this take place, we see a smaller tourist count then we normally would. Truth be told, national and state parks almost never close their doors entirely during such circumstances. That certainly doesn’t mean that it’s not an inconvenience, especially if you are a government employee who works in Zion. But all in all, tourists and locals alike could visit the park and check in to any of the hotels at Zion National Park just like they would on any other day, minus a few in-park services.

If you visited the park at any point during the three-day government shutdown, there are a few things that you may have noticed. Restrooms throughout the park were likely closed and locked. You may have seen some overflowing trash receptacles that needed emptying. There weren’t any friendly employees manning the booths for public information. Camping was not an option because all the campgrounds were closed. All park programs were halted. Emergency services were postponed, such as rescue and medical teams. To some visitors, some of these items may have been more of an issue compared to others. But that is the usual list of areas that affect national parks during an event like a government shutdown. Remember that if it happens again in the future, don’t cancel your plans to stay at hotels at Zion National Park. It would still be a good idea to find out for sure if the park is open or not by looking online or calling, but more than likely it would be and you would have very little to worry about.

This is also as good a time as any to remind you that the busy season is approaching which means your opportunity to experience hotels at Zion National Park with fewer crowds and more vacancies will soon be over only to return during Fall 2018. Visit cablemountainlodge.com today and come stay with us before the Spring and Summer rush begins. Also, don’t procrastinate booking your rooms for any Spring or Summer trip you may be taking to Zion this year. It’s better to reserve your rooms at Cable Mountain Lodge sooner than later. 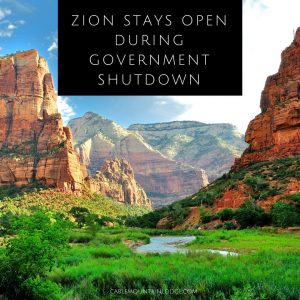