How much do you know about the geological history of Zion National Park? How did those enormous cliffs form and get their unique coloration? Where did Zion Canyon originate? This article explains the basics of Zion geology so you can know more about one of the most incredible places on Earth and how it came to be.

The Colorado Plateau is a physiographic region in the southwest portion of the United States that makes up significant sections of New Mexico, Colorado, Utah, and Arizona (the Four Corners). This sprawling desert landscape full of natural wonders is home to world-renown locations such as Zion National Park, Grand Canyon National Park, and Bryce Canyon National Park, all of which are interconnected geologically. Zion geology has shown that the rock layers throughout the Colorado Plateau have been eroded, titled, and uplifted over countless years resulting in a feature that has been named the Grand Staircase. In Zion, as well as in other areas in the Plateau, you can easily see the different stages and levels of sediment, one on top of the other. Interesting Zion geology fact: Zion’s top layer of rock is Bryce Canyon’s bottom layer and the Grand Canyon’s top layer is Zion’s bottom layer.

Over 200 million years ago, the area we know as Zion National Park today was actually sea level – a mostly flat basin. Over time, mud, gravel, and sand eroded from adjoining mountains and relocated by streams where they were deposited in layers into the basin. As more and more materials were carried and deposited, the basin slowly sank as a result of the weight of each additional layer. The top layer would consistently remain near sea level due to the submergence of lower layers. Zion geology shows that climates changed often and the land rose and fell over many years. The environment went from sea to plain to desert through the process of sedimentation and accumulated more than 10,000 feet of material.

The next stage of Zion geology involves lithification which is “the process in which sediments compact under pressure, expel connate fluids, and gradually become solid rock.” Water full of minerals (silica, calcium carbonate, iron oxide) filtered through the sediments and found their way through, hardening the deposits in conjunction with the pressure many layers on top of each other. Because the sources of individual layers are different, they each have a unique appearance, color, mineral content, and thickness.

The entire mountain range from the Rocky Mountains to Southern Utah was pushed upward due to slow movement in the earth’s crust. Eventually, the area rose almost 10,000 feet above sea level. Zion geology shows that this resulted in a more efficient cutting force for the streams as they made their way down to the sea.

The speed at which streams traveled increased with the land’s gradual uplift, carrying with it larger amounts of sediment and boulders. The rock layers, as shown by Zion geology, were cut into which resulted in narrow, deep canyons. The Virgin River as we know it today was once thousands of feet higher before effective and gradual erosion pushed in down as it transported huge amounts of sediment. Even now, Zion geology is still changing while the constant flow of the river slowly erodes the surrounding rock layers.

Learn more about Zion geology, Zion National Park, the city of Springdale, UT, and Cable Mountain Lodge by following us on Facebook and bookmarking our site, cablemountainlodge.com. We are passionate about Zion Canyon and are proud to call it our home. Reserve a room with us today and experience the wonders of Zion and Springdale, UT. 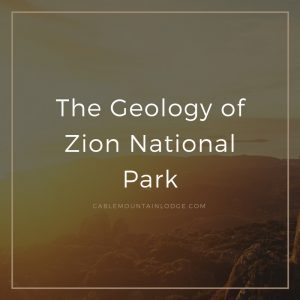